It's been quite a long time since our last technical situation overview (polish language version only). Meanwhile, WIG20 index has reached the level previously set by ATmatix, and made it even higher. On the other hand, small caps turned out to be the weakest link of the Warsaw Stock Exchange.

Recently, we've been expecting the rise to the level of 2468 points on this index, due to the upward breakout from the flat base pattern that emerged in july.
As you can see in the chart, this scenario has been already accomplished. 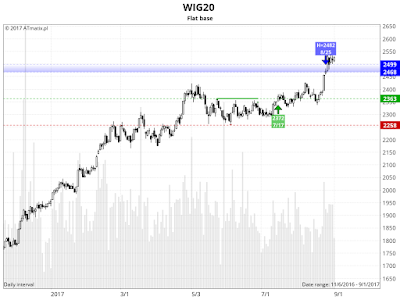 However, the first approach near the 2420 level failed and the index rebounced down slightly with the throwback below the breakout level of 2363 points. But bulls regained control once more and the index jumped above 2500, making its new yearly highs. Should we have expected that?


Let's take a look at another pattern - the ascending channel. ATmatix detected this setup on august, 14. The first downward breakout could be misleading, as the downward movement suddendly reversed and the index run up vertically with an impressive momentum, piercing the top of this pattern with a considerable turnover volume. Target price, predicted by ATmatix, was reached on august 28th, almost in point. 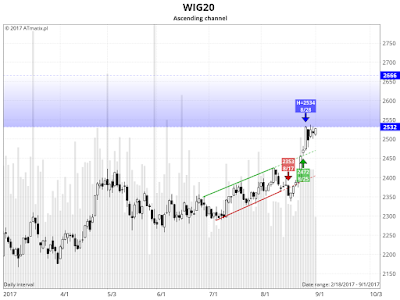 What to expect next? Looking at the double top pattern, which was invalidated with the upward breakout, we can expect another rise, even above the 2600 level. This target was measured using our statistics that allow us to predict the post-breakout upward movement even in case of pattern tops. 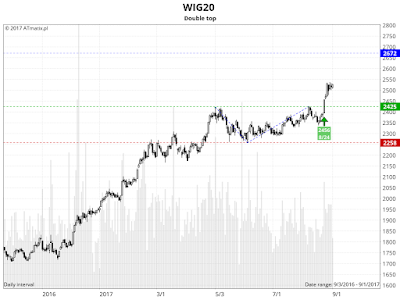 We had a similar situation already this year - forming the top pattern on WIG20, then invalidating it with a rise to the new highs - see the example pattern.

Of course this is not 100% sure, as we are already close to some significant resistance level, which was repeatedly tested in years... 2013 to 2015, and all these attempts resulted in bearish reversals. We're talking about the 2560 - 2630 range. Thus, we're getting close to the important point for this index. In our opinion, we can expect profit realizations near these levels, as far as demand manages to lift the index there.

When we looked at the technical situation for mid-cap stocks index in July, it was in the middle of testing its important resistance level. A number of chart patterns emerged there, for which the downward breakouts that occured could lead to a further decline - such as the rising wedge pattern below: 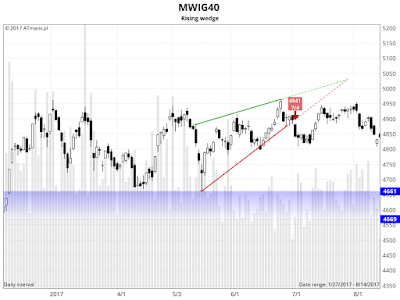 Nonetheless, the 4660 target has not been reached yet, as the drop was stopped near the 4800 horizontal support level. 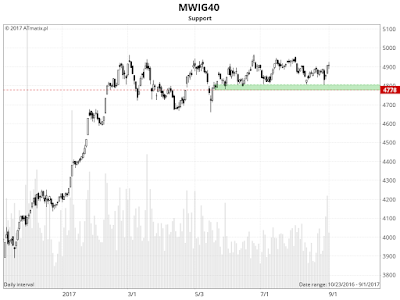 So we're in a sort of ambiguous situation here - we should be aware of both bullish or bearish scenario. We can expect a breakdown of the 4800 level mentioned above and seeking the underlying support near the 4660 area, or we can also expect the another attempt to break up the resistance located at 4960 points and reach for a new highs.

Previously, we pointed out at the triangle pattern and its downward breakout, for which the target of 15000 points on the small-caps index was set. This target hasn't been achieved yet and there is a chance that it won't be reached at all. Looking at the chart with a broader scope, we can notice the area near 15100 points and consider it as the potential support. It comes from the horizontal consolidation region that occured in February this year and the index value has already come close to this level during the last few weeks. 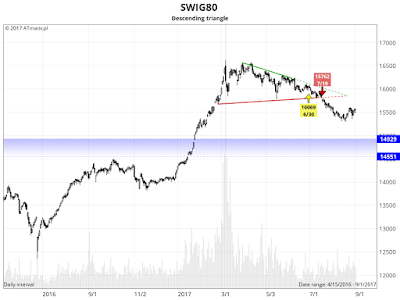 We can interpret the price scheme that emerged recently, in several different ways - for example we can consider it as a broadening falling wedge, and so it slightly changes the market perspective, as our statistics indicate the greater possibility for an upward breakout, rather than in the opposite direction. 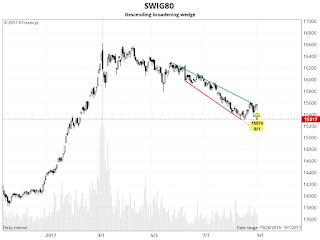 Another version of that data pattern was automatically recognized by ATmatix in this way: 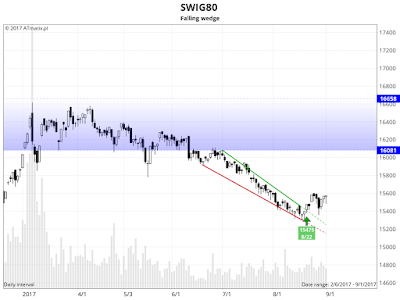 ... and yet another in the following way: 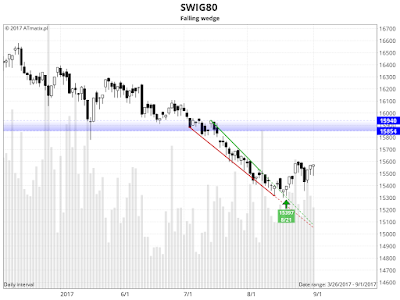 All these pattern types with upward breakouts are a positive signal quite often, so we can assume the index is likely to go back up near the value of 16000 points.

The situation is not so clear here as well, but still the attempt to rebound may turn out to be successful - in our opinion, the anticipated rise above the 15600 level, along with a strong turnover volume, should increase the chances to defend the recent minimum. If the market chooses the opposite direction, the level of about 15100 points is expected to form the another layer of support.