Quite a lot happened since our last technical situation overview. Now it's time for an update.

In the last post, we described the double top pattern and its invalidation with the upward breakout, which suggested a further increase, even to the level of 2600 points. This scenario has not worked out yet, but it doesn't mean we should reject it completely.

In the meantime, the index formed an another, slightly smaller version of a double top pattern, near the level of 2550. Last time we suggested that you should expect some resistance there:


(...) we are already close to some significant resistance level, which was repeatedly tested in years... 2013 to 2015, and all these attempts resulted in bearish reversals. We're talking about the 2560 - 2630 range. Thus, we're  getting close to the important point  for this index. In our opinion, we can expect profit realizations near these levels, as far as demand manages to lift the index there. 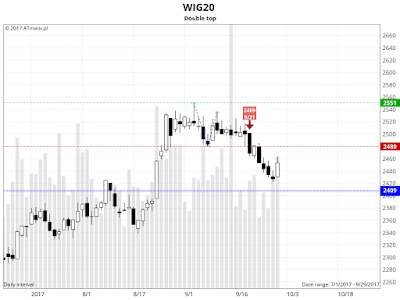 We can also treat the above price scheme as a head and shoulders, and both these patterns were detected by ATmatix. We signalled the downward breakout from the double top and the H&S top on September, 21. The price target was set to 2409 pts. However, we could also expect a reversal at the level of 2425, as the strong resistance was located there. It was pierced upwards in the end of August after a long horizontal consolidation. As a result, this resistance turned into a support level, so it has stopped the recent decline, as you can see in the charts. 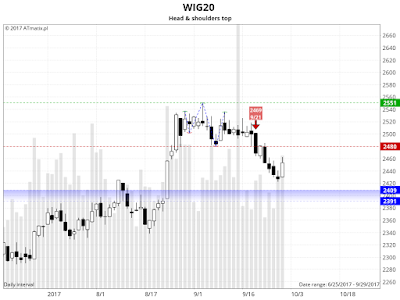 The scenario, assuming the reach for the new highs is still valid then, since the last correction could be merely a throwback after the invalidation of the large double top pattern mentioned earlier. 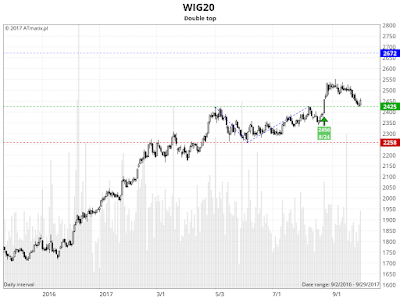 This bullish scenario will fail if bears manage to pull the index below the level of 2400 points. However, the new ascending trendline awaits there and it may turn out to be yet another level of support. 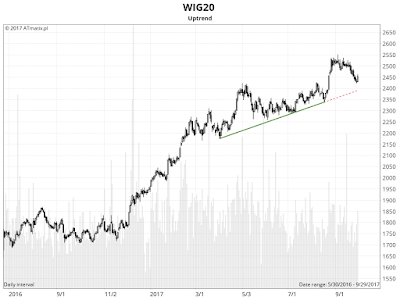 Mid-cap stocks have performed much better and MWIG40 index has reached its new yearly highs recently. By adding the height of the horizontal consolidation region, inside which the index has bounced up and down since the beginning of the year, to the breakout level, we can set the theoretical target to about 5200 points. 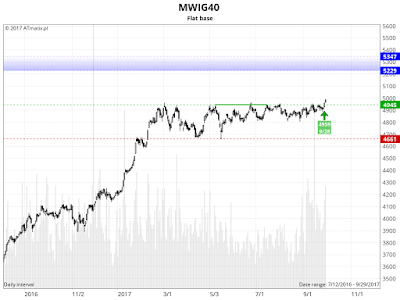 An alternative option is to add the height of the lower channel, inside which the price has moved since June. Then we can expect MWIG40 to rise to the value of 5100 points. The round number of 5000 may also act as an overhead resistance here. 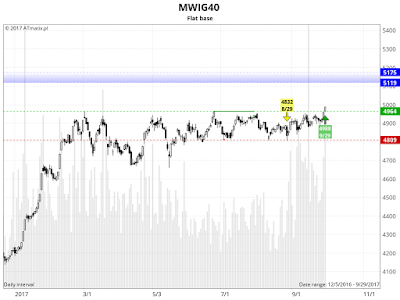 If the market chooses the opposite direction and retracts below 4800 points, it will be a clear alarm signal for bulls.

SWIG80 has been the weakest index of the main WSE indices for a long time. It continues its downward mid-term trend within the pattern that resembles a descending channel or a broadening descending wedge.

The horizontal consolidation region located at 15100 points, that could act as a support level, didn't stop the down slide, but there is a chance that the round level of 15000 will be able to do so. 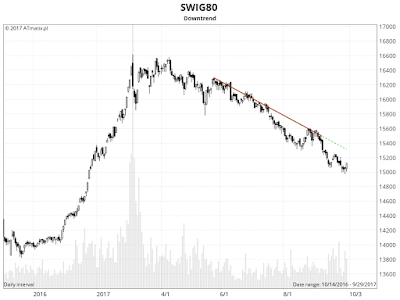 However, only the down-sloping trend line break would be an initial signal for the trend change (the line is located at about 15300 points as of today).

Much depends on the situation of the remaining indices mentioned above. Their positive performance can be a signal for the other WSE indices to follow.

Regarding the sector indices, the chemical industry stocks have performed quite well. It is a consequence of the upward breakout from the descending wedge pattern that emerged in June. Recently, the index has reached its yearly maximum. 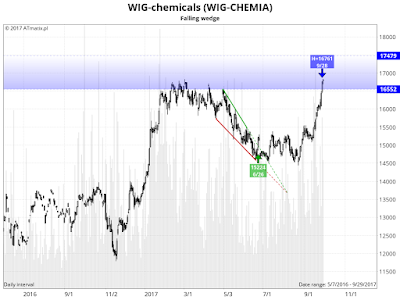 WIG-IT is on the other side of the coin. Stocks belonging to this sector have experienced a significant correction during the last few months. The recent index consolidation may suggest an attempt to rebound or it may be just another stop before a further decline. The level of about 2070 points is critical here. 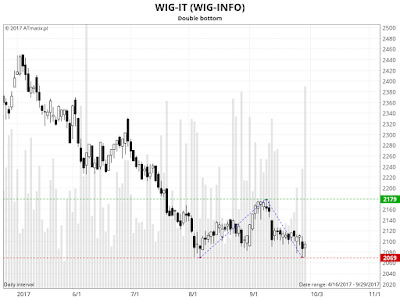